For some existing reverse mortgage borrowers – particularly borrowers who have a Home Equity Conversion Mortgage (HECM) sponsored by the Federal Housing Administration (FHA) – a number of factors may lead them to ask if it is both possible and/or beneficial to potentially refinance their existing loan into an offering with more advantageous terms.

The short answer to this is yes, it is possible to refinance a HECM reverse mortgage.

Refinancing can come with several possible benefits, including increasing the amount of money that you’re able to borrow from the loan, along with taking into account other factors that may have shifted into your favor since the original loan was first created, particularly in terms of interest rates and/or principal limit factors (PLFs).

Refinancing conventional, forward mortgages is a very common practice that some borrowers utilize in order to try and create more favorable terms as they work to pay off their home loan.

In terms of refinancing reverse mortgages, the motivation for doing so can come from a number of places that tend to be a bit more specialized.

This is because HECM reverse mortgages are only available to Americans that are at least 62 years of age.

In addition to a change in interest rates or PLFs as possible motivating factors, you may find it beneficial to refinance your reverse mortgage if your home value has notably increased, such as due to market conditions, or even after renovations that may have added value to the property.

Tapping into that additional equity may be beneficial for anyone who may require access to additional funds to meet more financial obligations in retirement.

WHAT IS THE ‘5 TIMES’ BENEFIT RULE 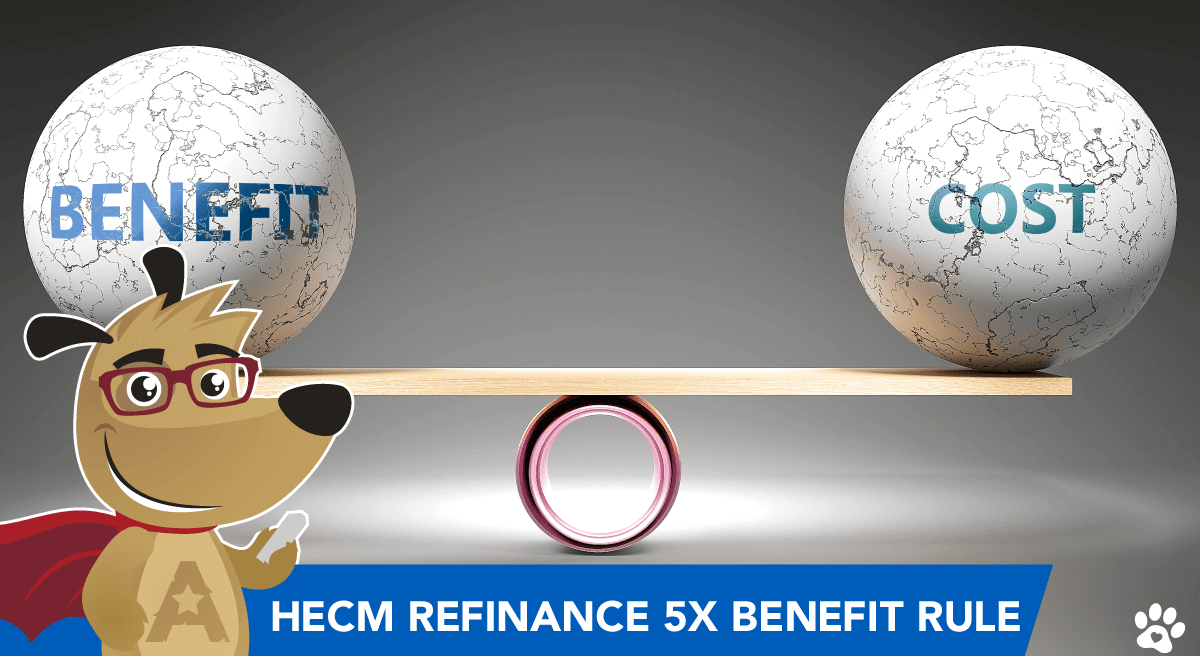 Guidance for the HECM program often comes in the form of ‘Mortgagee Letters’ (MLs) issued by the U.S. Department of Housing and Urban Development (HUD), the part of the U.S. government which oversees the Federal Housing Administration (FHA) which administers the HECM program.

In 2009, HUD issued a mortgagee letter that offered guidance specifically related to the refinance of HECM reverse mortgages, and it reads in part:

For HECM refinance transactions, mortgagors can waive and opt out of the HECM counseling requirement only if […] the following conditions are met:

Basically, this rule says that there has to be a certain value and/or benefit to the reverse mortgage borrower when it comes to refinancing their existing HECM reverse mortgage into another HECM.

In other words, if you, as the reverse mortgage borrower seeking out a refinance transaction have the potential to gain five times the financial benefit from initiating a refinance over the closing costs that you must pay under the terms of the loan, then considering a HECM-to-HECM refinance could make financial sense for you.

Let’s say that under the current terms of your existing HECM reverse mortgage, you have an initial principal limit of $100,000.

In searching for more amenable terms, you look into the possibility of refinancing into a new HECM and begin shopping around for options that could give you potentially better terms, which include access to additional funds.

In one instance, a lender offers you a new principal limit of $150,000, a $50,000 increase in value over your current arrangement, with estimated closing costs of around $5,000.

In a case like this, you have the potential to gain ten times more in additional loan proceeds than the amount of money you would have to pay ($5,000 x 10 = $50,000), which is well above the “5 times” rule and which makes the new transaction a viable option to consider.

Another lender offers you a new principal limit of $120,000, while estimating the closing costs somewhere around about $5,000.

Under this scenario, you would stand to gain four times more in additional loan proceeds than the amount of money you would have to pay ($5,000 x 4 = $20,000), which fails to meet the “5 times” threshold, at which point you should likely disregard those terms since they don’t represent enough of a gain for you to go through with the transaction.

SHOULD I EVER GO THROUGH WITH A LOAN THAT DOES NOT MEET THE ‘5-TIMES’ RULE?

That’s not to say that the second option would fail to work for all borrowers universally.

Particularly for existing loans that were originated prior to August of 2014, those existing loans may not have as many protections for non-borrowing spouses, since there was a time in which some borrowers took their spouses off of the home’s title in order to try and gain additional loan proceeds.

This is very dangerous under the modern lens of the reverse mortgage industry, because if something were to happen that led to the named borrower leaving the home, the loan would become due and payable and the non-borrowing spouse would be forced to live somewhere else.

For borrowers in that scenario, a loan that fails to meet the five times benefit rule may come with other benefits that were not originally considered, such as added protections for the non-borrowing spouse if an unexpected event were to befall the primary borrower.

Though there are not the same amount of added financial benefits under the terms of a loan that does not meet the 5-times benefit rule, the added protection coupled with a modest increase in available loan proceeds may be justification enough to go through a less financially beneficial HECM-to-HECM refinance.

If you’re a homeowner who is interested in using a reverse mortgage to supplement your retirement, you might want to consider a jumbo reverse mortgage, from which you may be able to access a greater portion of your home equity than you otherwise would with an FHA-insured HECM loan.

IS A HECM REFINANCE RIGHT FOR YOU?

Reverse mortgages might not be the perfect solution for every homeowner, but depending on your particular situation, a HECM could be something to consider as you approach your retirement years.

All loans subject to credit approval.

Rates and fees subject to change based on credit.